A downloadable dating sim for Windows and macOS

Flirt with a werewolf catgirl! Antagonize your emo best friend! Become a cool anti-capitalist punk! Drink root beer! Play DnD! Have steamy makeouts! All this and more can be yours for the low low price of FREE in the Gay Monster Kiss Club demo.

Gay Monster Kiss Club is for persons 18 or older only. If you are a minor, move along please!

Get the original soundtrack here!

ahhhh i love this game! i loved playing around with different gender identities as well, as i'm exploring that myself, and i found it so fun! it's kinda like dream daddy, but gayer!! anyway, thank you sm for this game!

regardless of this being a demo this is probably the most fun i've had playing a dating sim. given the opportunity i would die for any one of these characters. have a lovely day.

//potential spoilers ahead ;T Love that i got to take a werewolf catgirl to the bonezone, lookin forward to a full release.

Hella good job Devs! I just did a playthrough of this game for my Youtube channel. It will be out Friday (for Valentine's Day)! I'll be sure to link it when its live  (you'll also be notifed if you subscribe!) OffGaming

wow i'm so stoked! thanks for playing!!

This was a lot of Fun! Happy Valentine's Day!

ikr i'm so proud of our musicians!

Hi I havent even started the game yet, but Im a trans person and I am actually about to cry right now. Thank you so so much for the pronoun/gender/sex describing bit.

I've never seen my pronouns in a game before, and this really means a lot to me.

playing this made me feel things, can't wait for the full version! I'm also a game developer, and i really appreciate the cohesive feel and the way the characters read to the player! your other games also slap, i loved genderwrecked!

The story absolutely sucked me in, and I adore how inclusive the character creation is! I'm pumped for the full game to come out!

Thank you so much! For so long I hoped to find a game where, not only could I smooch/date/befriend monsters, but I could actually pick my own pronouns instead of just picking from he/him/his, she/her/hers or they/them/their. I use neopronouns (sometimes, since I'm genderfluid) and the second I was asked to type out my pronouns, I knew this was gonna be one of my favorite games ever. 💛♡💜🖤

aw i'm so glad it could be a cozy experience for you!!

Oh wow this is great! The writing has so much personality and the music was lovely.

This was SO good, incredible job to everyone involved!!! I loved every single character, honest to god. 100/10 would die for this game (Can't wait to see the full version!!)

aw jeez thanks so much!!

I LOVE IT, IT'S TOO GOOD DSJCGVHKRFD'

im hfhsg i
ThIS GAME MADE ME YEARn

thank u and also thank u michael petsnack

haha you're welcome! can i ask who michael petsnack is?

a friend! they gifted me this and donated and i love them

I enjoyed this demo thoroughly on my first playthrough. I can't wait to see what's in store for the full game!

I love it. The art style,the story and the music. Its all amazing and i haven't ever seen any thing like this before

will the full game be free? like the competed version.

will you add a updated demo? if so when?

thanks so much! the game is still pretty early in development, so it's hard to say when it will be done. i probably won't put out an updated demo because that would take time that would be better spent finishing the game!

i really like this game, it was cool to run through even if it's just a demo right now. It made me really happy when i saw it :]

is there any way to date adrian, like, am i just being stupid? i haven't found any option to hang out with him, hah

this is one of my favourite VNs that i've played, by the way! short and sweet and everything i've asked for, legitimately. not just monsters, but GAY monsters and they actually LOOK like monsters!! that means a LOT to me.

the demo doesn't give you an opportunity to hang out with adrian, but the full game will! thanks for playing, glad you enjoyed!

that was amazing! i really like harley and parker and the music is so cool josie did a great job as always

thank you! josie is amazing, as are m and tammy (the other musicians)!

omg im going to check them out!

I usually run away as soon as a game puts me in GSA, but the art drew me in, and boy am I glad I stayed. I love this game so much! It just kept getting better the deeper I got. Parker is bae, just gotta say. I can't wait to see what comes of this. Thank you for this treasure!

thank you for giving us a chance! i'm glad you enjoyed :)

Just a few weeks ago, we were talking on a Discord server about wanting (more) LGBT Monster dating sims and this is exactly what I was hoping for! And just in time for Halloween, too!

Luna's design is what drew me in, to be honest, probably by far the most "kawaii" character of the bunch. Still, after having played the demo, I like that the other characters aren't just cute eye candy conforming to common beauty standards like in many VNs, but actually look like monsters with their own, unique design. I think it also brings out their personalities a lot better.

Speaking of which: I think they're all interestingly written; even the characters whose routes I probably won't take (due to personal preferences and not that much free time) add some entertaining dynamics to the group.

And while there are many LGBT VNs out there now, I don't think I've ever played one that combined such diverse identities in such a short space without feeling like it's too compressed or only about that (though I like how open they were nevertheless and it actually makes me want to explore and express my own identity more confidently). The characters' background stories were very entertaining and their little quips hilarious! I also enjoyed the short DnD session. And the ending of the Luna route wasn't overly dramatic, but still left me wanting to find out what happens next.

Oh, and the soundtrack was neat as well! Chill and rather subtle, but still interesting to listen to without the visuals.

Overall one of the most entertaining VNs I've played in a long time...maybe even on the way to becoming my all-time favorite! Really, great job there! Very excited for the release of the full version (but take your time).

Also featured one of the most relatable screenshots I ever took: 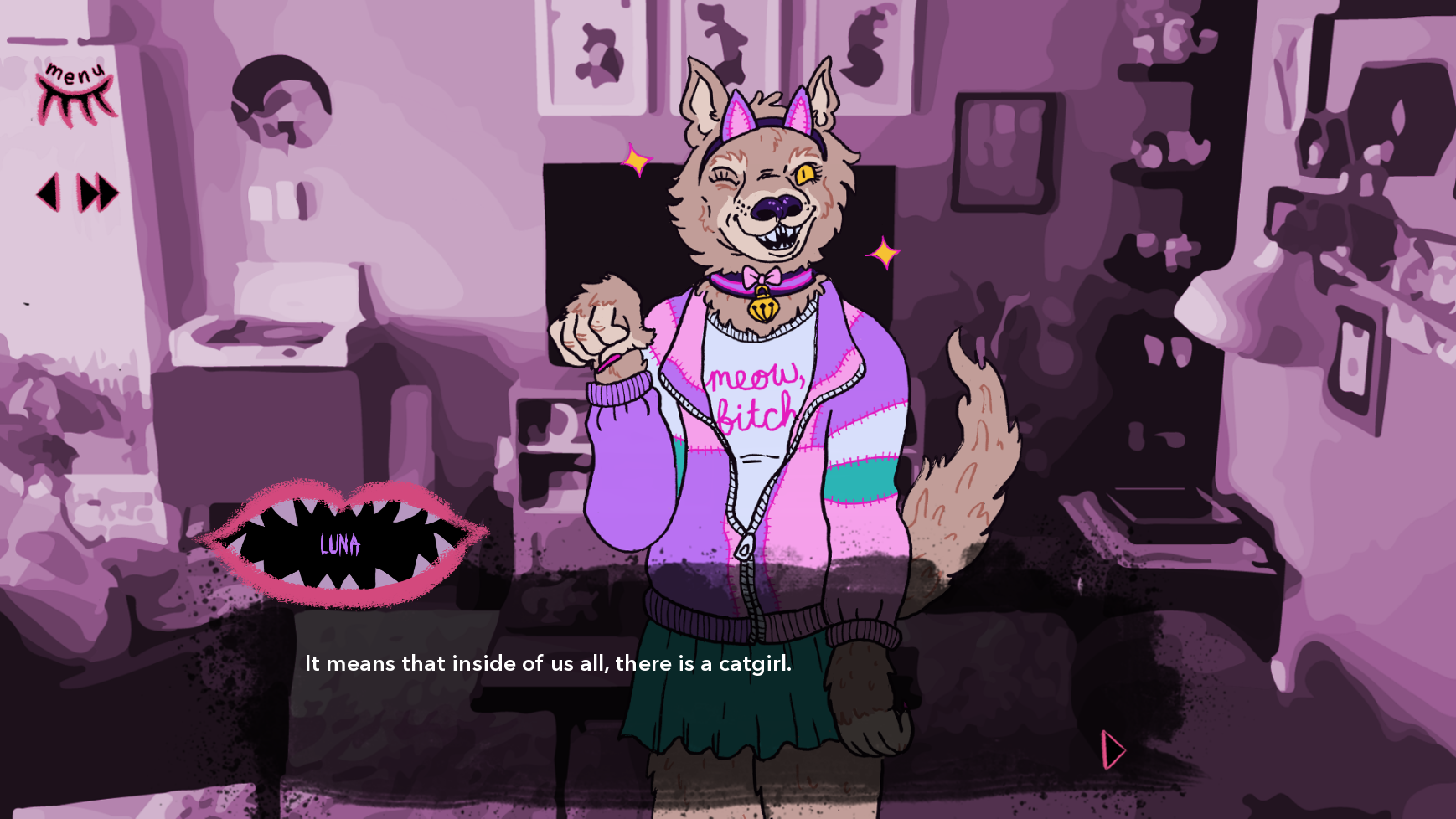 (I feel like I need that "meow, bitch" shirt now...maybe an idea for merch?)

gosh thank you so much!!! what a sweet review <3

I was really surprised by EVERYTHING

and i know, right? josie (the musician) is amazing! you can find the song at https://gaymonsterkissclub.bandcamp.com/releases!

Listen I LOVE THIS and I NEED MORE OF IT

this is SO CUTE i absolutely adore the character designs

As Usual Gameplay from Z9ZGAMES Channel!!
With All Thanks to the Creator of the Game!! 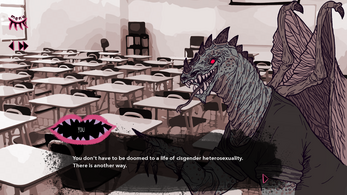 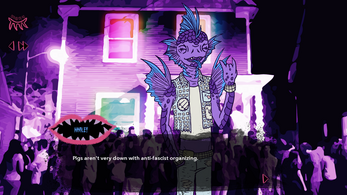 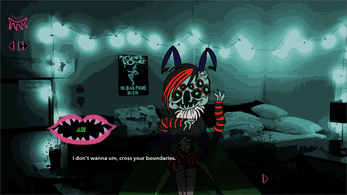 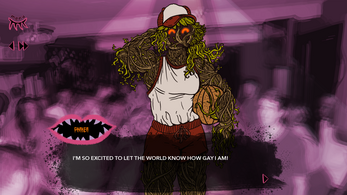 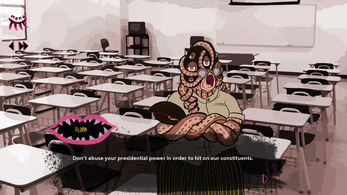 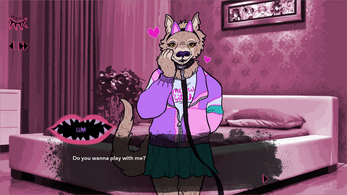